Uber drivers are planing to strike October 16-18, 2015 all over Orlando and other Cities as well. Drivers that plan to break the picket line will be bombarded with fake request. 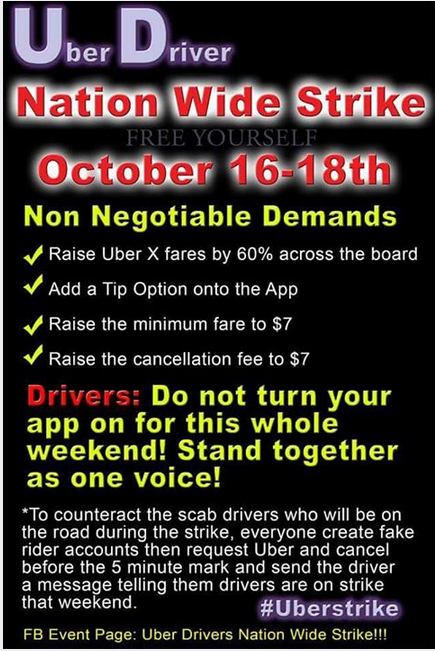 Do not bother trying to use Uber during these three days, there will most likely not be enough drivers to provide good service. Orlando is one of the worst Cities for an Uber driver, not just in the state or the Country but the World. The rate of 75 cents per mile is so low that the IRS even questions it. The IRS allows 57 cents per mile for deduction on Your taxes and it cost an Uber driver at least twice as many miles to make one paid mile. So when You call for a 5 mile fare, the driver typically will drive a couple miles to pick You up and then a couple or few miles after He drops You off to get back to a position to wait for the next request. It is very strange that Uber picked Orlando to cut the rate so low that all the good drivers had to quit and now Every time I use Uber I get someone that does not speak English and absolutely does not know where they are going. Orlando is the most visited City in America and is about to surpass Paris as the most visited City in the World but We have the lowest Uber rate? How?, Why? The rate for Uber was 1.5 then 1.25 then all the way down to 75 cents per mile in just a matter of months. It might have been a fight with Lyft that caused this drastic reduction but either Lyft or Uber could change the rate to 1.50 tomorrow and the riders would not know the difference and not even care, it would still be way less than a taxi. If Uber raised the price first all the drivers for Lyft would quit Lyft and drive for Uber so Lyft would have to follow suit because there would be no drivers to pick up Lyft riders, simple supply and demand. Uber did raise the price on one item today: they raised the price of the safe rider fee from one dollar to 1.85, wow, that is a drastic increase and it is ALL FOR THEM, the driver does not get any of the safe rider fee, that is all profit for Uber.

Uber and Lyft will be forced to raise the rate very soon, not because they want to take care of the driver but because the unemployment rate is going to force them to. No One will need to drive for Uber or Lyft because there will be so many other jobs they can get for much better pay. The only reason the few drivers are still driving at such a ridiculous rate is because of the flexible schedule. Other Companies will offer the same in the very near future.