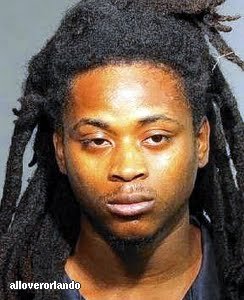 It is shocking to hear that Someone was shot dead inside a moving vehicle on I-4 in Orlando, that could have killed or injured many more. Junior Enock Gedeon was the shooter and admitted so but said He was in fear that one of the passengers was going to attack Him so He took action first. What is shocking about this case is that Junior Enock Gedeon was on house arrest and that He was partying in the tourist corridor just hours prior to the killing. Of course He was not suppose to be partying but there was nothing stopping Him from doing so. The worst part is this Person was in the tourist corridor, right across the street from popular hotels.

Gedeon was partying at The Glitz Nightclub in the night leading up to the I-4 Shooting. The Glitz Nightclub is on the corner of Universal and Carrier just one short block from International. The Club is pounding music as late as 4am on a regular basis, shaking the windows of hotel rooms within half a mile. The Club is across the street from Westgate Resorts, a Time Share Property, Enclave Suites and Point Orlando, all of which are popular tourist destinations. In the immediate area is Wet N Wild and Universal Orlando.

Guest staying in each of these Hotels were shocked to learn that a killer was so close. Many were aware of the Glitz Night club because of the loud music coming from it, keeping them awake until early morning but didn’t think any more of it.