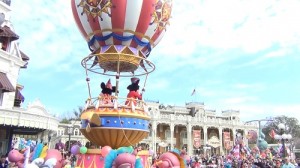 over 19 million People visited the Magic Kingdom in 2014. It was thought that Universal Orlando would push closer to that number with the addition of a second Harry Potter area added to Universal Studios but all that did was balance Islands of Adventure and Universal Studios to 8 million each. That is a good increase because Universal Studios was slacking by more than 2 million behind in 2013, now the parks are nearly equal. The likely benefit for Universal was in the 2 park tickets that most People bought so they could see both Harry Potter areas and also take the train between them.

Seaworld had declining number at 4.7 million which was really no surprise considering the terrible public relations year caused by the documentary “Blackfish”. Seaworld sat on their hands as the documentary slammed the park for mistreatment of the killer whales. They did not defend themselves for months much to the surprise of stock holders.

All in all, Disney is still killing the competition with the vast majority of theme park visitors. The Orlando area had 64 million visitors in 2014 distancing itself as the number one area in the United States by at least 20 percent. New York is second and Las Vegas is third.