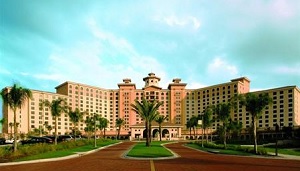 Harris Rosen has kept His name off most of His Hotels for many years, but with some encouragement from His Children He has agreed to put His name on them all. The last of His Hotels that did not have His name on it was the International Drive location next to the World’s largest entertainment McDonald’s. That one was a Quality Inn but was owned by Rosen for over 30 years under that brand.

Rosen at Shingle Creek Resort
9939 Universal Boulevard, International Drive. This Resort is behind the Orange County Convention Center but don’t let the address fool You, this resort is actually closer to SeaWorld than it is to Universal. This is a mega Resort with a gated entrance and one of the top luxury resorts all over Orlando.

Rosen Inn at Pointe Orlando
9000 International Drive, Orlando. This Hotel is just across from Pointe Orlando. It is also a short walk to the Orange County Convention Center, it is adjacent to Rosen Plaza.

Rosen Plaza
9700 International Drive, Orlando. This Hotel was once a Clarion but always owned by Rosen, it is also across the street from Pointe Orlando and next to the Orange County Convention Center.

Rosen Inn International
7600 International Drive, Orlando. This Hotel is on the corner of Sand Lake and International right next to the World’s largest Entertainment McDonald’s. You might notice that the booking is still under the Quality name but it is actually a Rosen.

Harris Rosen has been a successful hotelier through the best and worst of times all over Orlando. He has given back to the community better than Anyone in the business and when You book a room at one of these properties, be aware that it is with a very fine business organization. Since these names sound so much alike it is encouraged to get a hotel card when You check in so You can show a taxi driver the address. Taxi’s are known to take You to the wrong place if the name is similar, some say it is on purpose but either way, it is a waste of time.