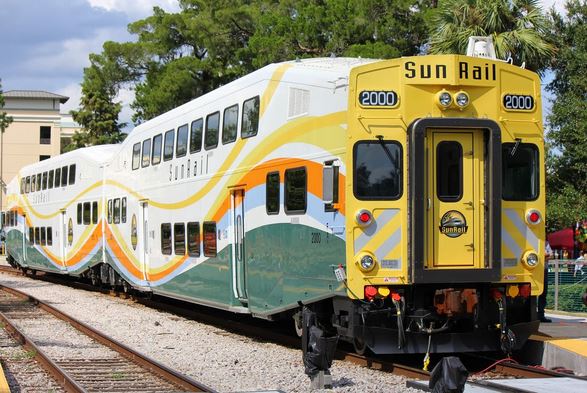 SunRail trains are beautiful but that seems to be the only thing that has been done right on this project. The layout for seating is just plain dumb. With seats facing each other means that half the passengers will ride backwards and all will face another Person. Most of the riders will be single riders and there is nothing worse than being stuck on public transportation facing a stranger.


The trains have only been running a few weeks and already there have been accidents.
So far a train has hit two vehicles, one a landscape trailer and one an SUV. Both times it was idiots that had their vehicles on the track even though the arms were down, but that should be impossible to do no matter how stupid a Person is. If the arms are down it should be impossible for a vehicle to go around them. They need to be redesigned or strict fines enforced by video cameras should be imposed. At least 1000 dollars for the first offense would put a stop to these inconsiderate drivers.


The biggest problem facing SunRail is selling tickets, so far it hasn’t been easy to pay for a ticket. Even if all is working, the system is just plain stupid. If You can buy a ticket You are suppose to go to a kiosk and tap in and when leaving You are suppose to tap out. You can board the train without paying and if You get caught You have to pay 50 dollars. I think a lot of People will take a chance of not getting caught since they will not face criminal charges. So it is almost an Honor system and People love to cheat honor systems. You absolutely must have turnstiles that are operated by a valid pass that should be just tapped on the top to let the turnstile operate. These systems have been in Hong Kong since 1980.

It is clear that the designers and operators of SunRail did not bother to visit successful train operations across the Country because so far this one is a joke.