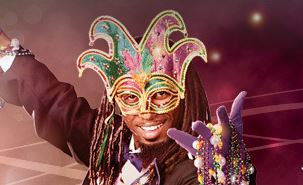 ADDITION: JUNE 7 Robin Thicke After cancelling His original performance, He has made time for Mardi Gras. Listen to Him tell You about trying to get His wife back, He has been doing that at every concert since She left Him.