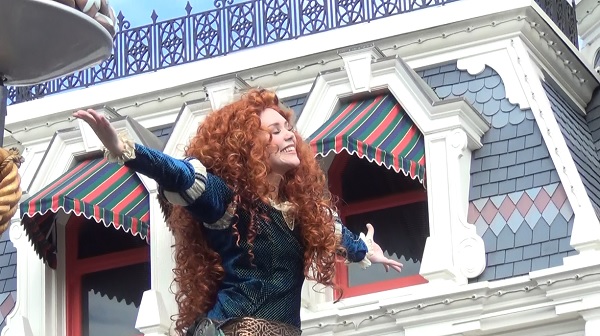 )
This Festival of Fantasy Parade Video can be viewed in full screen mode, it was created in the highest quality available.
The Festival of fantasy Parade made it’s debut on Sunday, March 9, 2014 at 3pm. You can catch the parade everyday at 3pm on Main Street USA and in Frontierland. The crowd was large and competitive. The second showing on Monday was the same. Most People were lined up for the Parade before 2pm but late comers still tried to push their way into the space of those that waited for well over one hour, the Disney workers were not much help, in fact, part of the problem. As late comers tried to see the parade from the walking path the Disney workers ask them to move along or go under the white rope to watch the parade, the white rope were families had waited for more than one hour were now pushed together and some were now unable to see very well because late comers were displacing them.

The parade itself is magnificent and includes a cast of near 100 and elaborate floats. Everything is new, including the music. According to Disney World, the parade is a tribute to Fantasyland, recreating the stories of films like “Peter Pan,” “Tangled,” “Brave”, “Little Mermaid” and more. This is not a revived parade, it is new from top to bottom and probably one of the best across all Disney theme parks.